The history of St. Barnabas, one of Victoria’s oldest parishes, is a rich and varied tapestry.

Victoria in the 1880s was British Columbia’s largest city. Anglicans worshiped at either Christ Church Cathedral or Saint John the Divine. When the Bishop, the Rt. Rev. George Hills, learned that Anglicans living in the vicinity of Pandora Avenue and Cook Street were holding services and desirous of building a church, he encouraged the Cathedral congregation to participate in the proposed parish.

Thirty years after his arrival in 1860 to become the first Bishop of British of British Columbia, Bishop Hills was no stranger to growth and change. The creation of the Dioceses of New Westminster, Kootenay, and Caledonia had shrunk the boundaries of his original diocese, reflecting the rapid growth of the entire province in those post-Gold Rush years.

And so, in the early months of 1890, Bishop Hills assigned to both the new parish and its church, a patron: Saint Barnabas. A wealthy Cypriot Jew, Barnabas, according to the Book of Acts, disposed of all his worldly goods, determined to spread the Gospel of Jesus Christ. He traveled extensively throughout the Middle East with Paul and also with Mark, his cousin. Translated from the Greek, the name “Barnabas” means “son of encouragement.”

The Parish of Saint Barnabas-Spring Ridge was given boundaries that roughly encompassed the area bounded today by Cook Street on the west, Bay Street on the north, Richmond Road on the east, and Pandora Avenue on the south. Spring Ridge, a growing community on the edge of what is today a larger neighbourhood named Fernwood, was the location of a series of springs that for many years provided water for the residents of Victoria.

Founding parishioners have left written descriptions of what must have been an attractive pastoral area. Rolling fields of grasses and shrubbery stretched to the west towards Saint Michael and All Angels, already established in the hinterlands of West Saanich Road and to the east, taking one over gentle hills to Saint Luke, Cedar Hill. The area provided ponds and streams for swimming and fishing and abundant sites for hiking and picnics. To the east and south-east lay the slopes of today’s Fernwood and Rockland, both awaiting the pending residential building boom adjacent to downtown. 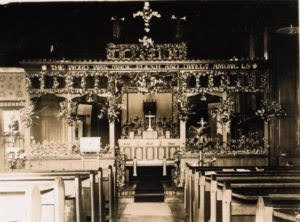 Land, measuring 110 x 90 feet, was purchased at the north-east corner of Cook Street and Caledonia Avenue. Adjacent to the property was the Jay family’s nursery. Bishop Hills laid the cornerstone on October 19, 1890. Twelve weeks after construction began, the church was dedicated by Bishop Hills on January 8, 1891. It was a simple, unpretentious building, in keeping with the new homes being built nearby. Built of wood, in the carpenter-Gothic style popular at the time, it rested, not on a foundation, but a series of concrete footings. In front of a plain altar stood a rood screen on which was inscribed this phrase from Saint John’s gospel, “The Word was made flesh and dwelt among us.” Heat was provided by a pot-bellied stove, and light by coal-oil lamps. 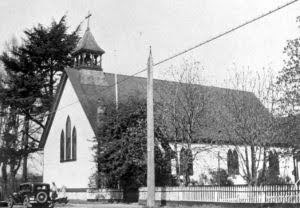 Bishop Hills placed his newest parish in the care of the Rev. James Taylor, a young priest who had served as one of a number of missionary priests throughout Vancouver Island and the Gulf Islands. From the beginning, the Parish of Saint Barnabas acquired a distinctive Anglo-Catholic flavour. With a surpliced choir, it was the first parish in the diocese to offer Sung Mass each Sunday. Thus began a distinguished musical reputation under the initial leadership of Sterling Floyd, and later Jesse Longfield, John Watson, Mary Yerburgh, Ian Galliford, Stephen Shields, Robert Pletsch, and in recent years, Jerry McDonald, Michael Jarvis, and Marco Vitale. Saint Barnabas’ excellent acoustics have long made it a popular location for community musical events.

By 1906, the parish had grown to more than 200 families. A new pipe organ had been installed, an additional lot purchased, a Sunday School building erected on it, and all debts paid. The church was consecrated and no longer received financial assistance from the diocese. One example of the mission focus of the parish was the formation in 1907 of the Woman’s Auxiliary, the first branch to be formed in this diocese in support of this national organization’s mission work throughout the world. 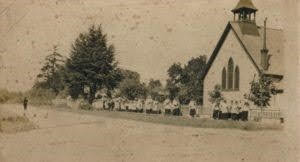 By 1908, a building fund for the erection of a “permanent, stone” church had been created. The cost of ongoing repairs and maintenance plus the financial depression of the 1930s stalled the building dream as did World War II. The parish continued to grow, the parish boundaries were increased, and the mission of Saint Alban’s created in the nearby Oaklands area.

By 1950 plans were well underway for the erection of the present church on the south-east corner of Belmont Avenue and Begbie Street. On a wet and windy day, November 25, 1951, the cornerstone was laid by Archbishop Harold Sexton. Unlike the first church, built of wood and sitting upon a series of concrete footings, the new church was built of stone upon rocky outcrop, atop the highest point of land in the Fernwood neighbourhood. 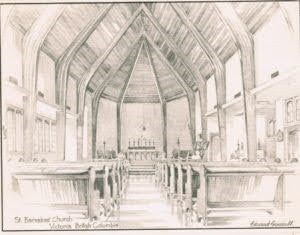 Designed by John Wade, an eminent Victoria architect, the new Saint Barnabas spoke of the twentieth century: soaring arches, large windows containing translucent glass, and a steeply pitched roof that, together, at last gave people natural light and an uplifted spirit in which to worship. The rounded apse in the sanctuary gives clear emphasis to the High Altar and in turn the centrality of the Holy Sacrament in the lives of our people.

The first Mass was celebrated on Palm Sunday 1952. Two Sundays later, April 20, marked the church’s dedication by Archbishop Sexton. (Anglicans refer to the Sunday following Easter as Low Sunday, in recognition of the often-reduced attendance that day. Low Sunday 1952 was anything but low!) In this same month, Archbishop Sexton held the first of the many ordinations he conducted in a liturgical space he greatly loved. 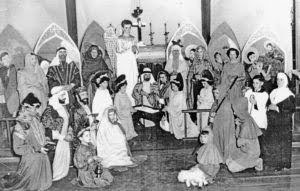 The joy of the people of Saint Barnabas at that time can only be imagined now. The zeal of their giving-back to God is best illustrated by Archbishop Sexton’s quick return to the parish for the consecration of the church, signaling its offering to God debt-free. The service was held on November 16, 1952, a mere six months after its dedication and only fifty-one weeks after the laying of the cornerstone. Such an accomplishment is unusual indeed.

To the new church were brought furnishings from the original, among them the altars, the impressive lectern (dedicated in 1899 in memory of Bishop Hills), the Sanctus bell, the font, altar rails in the Lady Chapel, and communion vessels. On the Feast of Saint Barnabas, 1953, our splendid hanging rood was dedicated, the first of the new gifts offered to the Glory of God in the present church.

The history of the parish has all the joys and sorrows that accompany the actions of the Holy Spirit and the people of God. The 1960s brought change to the Anglican Church of Canada, change which some clergy and lay people answered with their disaffection from church. Amendments to the Marriage Canon (thereby permitting the marriage of divorced persons), the ordination of women, and the adoption of the Book of Alternative Services to accompany the Book of Common Prayer all proved to be divisive.

These events plus the interplay of human personalities within the parish overtook the Holy Spirit and the teachings of scripture, and contributed to the departure of parishioners, including key leadership. Left behind was a shattered, grieving community, diminished in numbers but not in faith. The Holy Spirit prevailed, and in keeping with the teachings of Christ and Saint Paul, the faithful who remained and those who returned kept alive the mission of the parish with the encouragement of the Bishop. 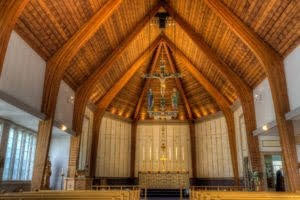